Nose: Camping should smell this good. A gentle haze of smoke from a sage brush and old oak fire from a few miles upwind. My parents used to drive us from Los Angeles, through Death Valley and up into the mountains where we would camp by a river. This was back in the days before you had to stay in an assigned spot. It was usually searing hot and we’d spend days building dams, fishing and drifting in the water. I can still smell the hot stones on sandy soil. Roasted trout with sea salt. Wild flower honey.

Palate: Holy shitballs, that is delicious. We had dinner with business partners last night and my favorite dish, which everyone else hated, was a grilled and smoked head of lettuce with candied strawberries, tiny crisped anchovies and a drizzle of sweet cream. The sweet, the salt and the creaminess pair sublimely. Salted toffee. While the peat is the star, and the under study, I like the granny smith apple peel vibe.

Rating: 7 / 10 – As Port Charlotte gets older, I keep expecting the peat to mellow, but it just seems to integrate better over time. I love the way it dances with the bourbon sweetness. I do wish it had an extra note or character to bring deeper complexity, as in some ways for my palate, it is almost too pretty. I know, it’s weird complaining because the pour has nailed a perfect note. I can’t wait to try its sister cask.

Nose: We took the kids for breakfast yesterday to Lava y Salt, a new bakery that makes epic light scones. Instead of whipped cream, she paired them with a bowl of mascarpone frosting. Both sweet and yet slightly funky. A tiny dash of sea salt. More body than cream and a definite step up for me. Kids were nonplussed. My daughter ordered golden milk, a daring adventure into the unknown, which turned out pretty delish and not at all what we expected. Ginger and cinnamon, honey, a dash of coconut and a fair bit of turmeric. More earthy than spiced chai. Thankfully this wasn’t as hippy as it sounds, so no incense, but that would basically cap this nose off perfectly.

Palate: Incredibly salty, which works for me given my heavy hand in the kitchen and years as a surfer, but you have to be into that and it’s a lot. Coriander and cardamom. Lime leaf and green plantains. The bitterness of green bell pepper. And a medicinal peat vibe, which feels unusual as I typically think of Lochindaal closer to the bbq smoke than classic Islay style of other brands. A palate of the sea and the soil.

Rating: 6 / 10 – I think what I love most about Lochindaal is how consistent they are. If you like one, you will like them all. It makes reviewing them a touch dull at times, but given how much joy they bring, screw it, it’s a delight! Drink it and have a nice day. But, given its my prerogative to be a touch picky, this isn’t hitting quite all the right notes for me at the moment. I find myself focused on the unusual bitterness. One of my last favorites bottles to date, which isn’t saying much as you can see from the score and is still excellent. Splitting hairs.

We tried 6 pre-release bottlings from both Jim McEwan and Dramfool’s personal collection. Some of the best bottles I’ve had this year.

Dramfools managed to get their hands on a number of casks from Jim McEwan’s private collection. A huge win for Bruce and his crew. May.. 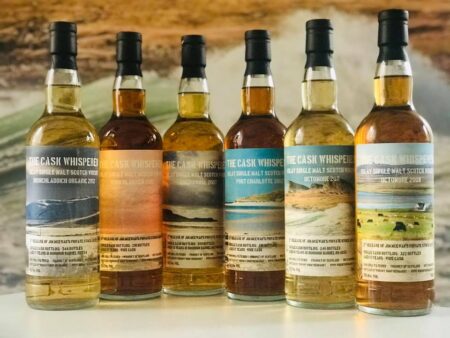 The first cask whisperer release had one of the best Port Charlotte’s I’ve ever tried. If you aren’t familiar, Jim McEwan was the maestro of..